RWI provides our Silicon Valley Research & Development customers with a unique capability that is matched by very few other manufacturers. With over 40 years’ experience in the development of advanced technologies, our team nominally focuses on meeting RWI’s in-house needs in manufacturing research and product or process development. However, when requested, our team is available to consult with customers and assist them with product and/or process development. 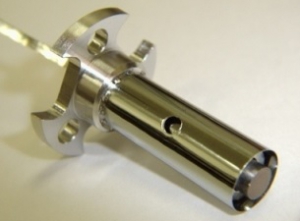 As an example, RWI agreed to collaborate with one of our customers, Calbasas Creek Research (CCR), to help develop a novel cathode material. This work involved research into, and the development of, a process for the fabrication of a new cathode material which was produced by sintering together a large number of 20m diameter tungsten wires. This collaborative project was highly successful, producing both a number of prototype and production cathodes and a process for manufacturing the novel tungsten material, and resulted in the receipt, by CCR and RWI, of a prestigious R&D 100 award in 2011. 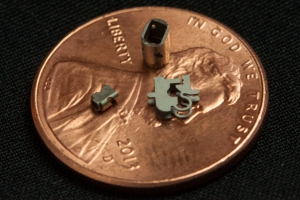 In another project, RWI’s team collaborated with a customer on the design and development of a prototype device to remove plaques from blood vessel walls. This device, which was approximately the size of two grains of rice, was composed of 5 different component parts, including a small circular saw blade. The device attached to the end of a catheter with an embedded microscopic rotating shaft (which turned the saw blade) and a vacuum tube. In operation, the device was inserted into a blocked blood vessel, where it was opened, the shaft rotated to turn the saw blade and a slight vacuum applied to the end of the vacuum tube. By making successive passes, the saw was able to remove a layer of the blockage at each pass. All of the components in this device were manufactured with RWI’s micro-machining and fine wire EDM processes. Ultimately, a series of prototypes was manufactured and successfully tested in animal models.

RWI has also been awarded, and successfully completed, Phase I and II Small Business Innovative Research (SBIR) grants for the development, in conjunction with Stanford Linear Accelerator Center (SLAC), of miniaturized linear accelerators. Under this SBIR project, RWI developed a process for micro-machining structures in a series of copper plates, using a combination of micro-milling and fine wire EDM. These plates were then fused together using an interlayer diffusion bonding process developed in conjunction with Lockheed Martin. Once these plates were bonded together, they formed a single block of copper which internally contained a finely-detailed, 3-dimensional wave guide and a series of cavity structures.